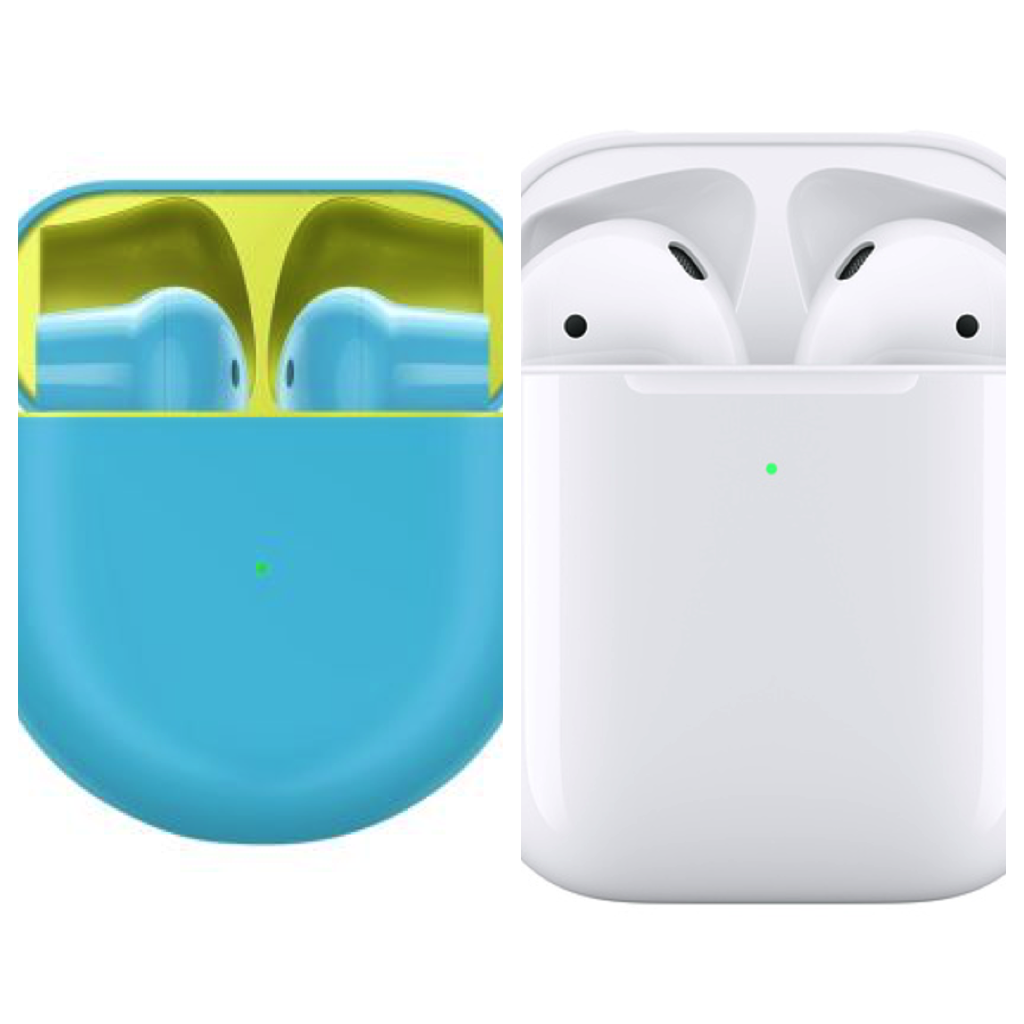 The Apple AirPods cost $160 but the OnePlus Buds only cost $80, that’s half the price and that is a big deal. But before you make your decision just off the price alone is take a look at everything else.

OnePlus Buds are bigger and have more surface area to be in contact with the inside of your ear. OnePlus fits a little bit better for the ear.

One thing with the OnePlus Buds is that they do have an IP rating of IPX4 and so that means that they should be fine against accidental splashes of water and sweat.

If you do like some variety when it comes to colors, the AirPods only come in classic white, but the OnePlus Buds do come in blue, white and gray.

Both of these do support touch controls. For the AirPods, you can double tap either the left or the right earbud and you can control your music or you bring up Siri. With the OnePlus Buds, they not only give you a double tap option, but also you can do a long press on either one of the earbuds to be able to control your music and also able to activate the voice assistant. So you get a couple of more ways to be able to use touch controls with OnePlus Buds.

With assistance, if you have the AirPods second generation, you will be able to activate Siri, and it’s always going to be listening. But with the first generation, you can only assign that to like a double tap. With the OnePlus Buds they don’t have an always on listening feature, but you can set up the voice assistant to activate when you do double tap or long press.

Both of these do come with charging cases and each one fits in your pocket with no problem, but the AirPods case is going to be slightly smaller and then on the back of the case you will find a single button that when you press it you’ll see the charging information or the battery information for the case. And then also when you do press and hold that will activate the pairing mode.

Both of these do support fast pairing. So with the AirPOds if you’re using an iPhone 7 and above, you’ll be able to just open up the lid and then it will pop up on the screen and allow you to pair that to your iPhone and then when it comes to the OnePlus button If you’re using an Android phone that’s running Android 6 and above, you’ll be able to do the same thing. But when you do want to use your AirPods on an Android phone, or vice versa with the OnePlus buds, you just have to go through the Bluetooth settings like normal. And when these are paired with their primary operating system, you can see information like the battery life of the individual bus and the case, like on Android, you can see that in the notification panel. And iOS, you can see that information in the battery widget, especially with iOS 14, that you can just put right there on your homescreen. And just like fast pairing, if you are using your AirPods on an Android phone, you can’t see that type of battery information unless you download a another app like I’m using Android pods. So when I do open up my air pods, and I have them paired with my Android phone like I have with this OnePlus nor you can see that it does show me that same information like it does on my iPhone, which is pretty cool. And also I can see that information in the notification panel as well. Oh, and also in this app, you can enable error detection for the air pods on Android because by default that only works when you’re using them with an iOS device. So when you do take them in and out of your ears. They don’t play or pause the music with Android.

For AirPods, you can listen to music up to five hours, but with the OnePlus Buds, you can listen to music up to seven hours and in both of these cases are charging cases. So combined with the charging case, you can get a total listening time with your air pods of 24 hours, but the OnePlus Buds can get you a total listening time of up to 30 hours. So that’s a significant difference in battery life.

OnePlus Buds also do support fast charging so when you plug in the case via the USB-C cable that comes with it in just 10 minutes, you can get up to 10 hours of listening time which is pretty fast and with the air pods if you charge them for evenly longer for 15 minutes, you only going to be getting three hours of listening time. But the AirPods has one trick up his sleeve because you can buy a wireless charging case separately, which will cost more money. But that will allow you to be able to just plop this down on the wireless charger and then walk away where the OnePlus Buds do not have that option at all. And another unique feature that the OnePlus bus can take advantage of when you are using them with an Android phone is that if you do lose the earbuds maybe they’re lost in the couch somewhere you can actually go into the settings and ping the individual earbuds.

Most reviewers say that AirPods sound more warmer and louder. For OnePlus Buds has a bass boost, but according to reviews, it has better bass than the AirPods by a wide margin. But on the OnePlus buds, it has support for Dolby Atmos. But most people will be fine with the audio quality coming from each one of these earbuds.

AirPods are wireless Bluetooth earbuds created by Apple. They were first released on December 13, 2016, with a 2nd generation released in 2019 and the premium AirPods Pro released later that year. Within two years, they became Apple’s most popular accessory, turning into a critical success and viral sensation.

One Plus Technology (Shenzhen) Co., Ltd., commonly referred to as OnePlus, is a Chinese smartphone manufacturer based in Shenzhen, Guangdong. It was founded by Pete Lau (CEO) and Carl Pei (Director) in December 2013. The company officially serves 34 countries and regions around the world as of July 2018. They have released numerous phones, amongst other products. It is currently majority owned by Oppo as its only shareholder, which is a subsidiary of BBK Electronics along with Vivo and Realme. However, both OnePlus and Oppo denies OnePlus is a subsidiary and maintain they are independent companies, although OnePlus confirmed it uses Oppo’s manufacturing line and shares part of the supply chain resources with Oppo.