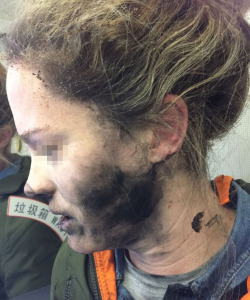 A woman whose headphones caught fire on a plane suffered burns to her face and hands, Australian officials said Wednesday as they warned about the dangers of battery-operated devices in-flight.

The passenger was listening to music on her own battery-operated headphones as she dozed about two hours into the trip from Beijing to Melbourne on February 19 when there was a loud explosion.